A New Beginning for the Australian Landscape

Peter Andrews OAM is a farmer and a race horse breeder from Bylong in the Upper Hunter Valley. He is a man who many believe is way ahead of his time. Peter has gained fundamental insights to the natural functioning of the Australian landscape that leave him almost without peer. He has applied these insights in restoring his and other properties to fertility levels that he says existed upon European arrival in this country.

On 26 January 2011, Peter Andrews was awarded Australia's highest public award - the Order of Australia Medal. He is a Consultant on the Advisory Board of Rain for Climate, an international organisation formed by pre-eminent climate, soil and water scientists from around the world.
​
Over 30 years ago, Peter bought a run-down 2000 acre grazing property called Tarwyn Park, near Bylong in the Upper Hunter Valley. He then quietly set about testing the theories that he had been developing virtually ever since he was a child growing up on a station near Broken Hill. By 1976, Peter Andrews claimed that the model he had set up on Tarwyn Park was an example of a sustainable agricultural system.

Peter had recognized that the incised nature of most streams in Australia was in fact accelerating the fertility decline of agricultural landscapes. (see Figure 1) 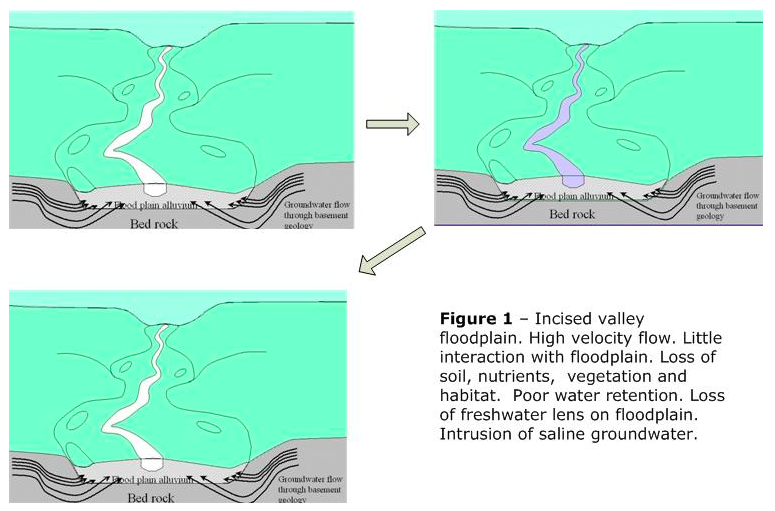 Stream incision meant that the increasing erosive energy of water was leading to accelerated soil and nutrient loss, lowered capacity for the floodplain to hold water and a loss of wetland habitat within that valley. Stream incision had in fact lead to a total disruption of the natural fertility cycle, leading to a chronic decline the overall health of the landscape. He also observed that, under natural conditions, the interaction between fluvial and biological processes would combine to maximise the efficiency of nutrient and water use as well as carbon cycling. He argued that this would actually lead to a growing of that landscape as sedimentation would far exceed erosion and carbon sequestration would far exceed carbon loss. (see Figure 2) 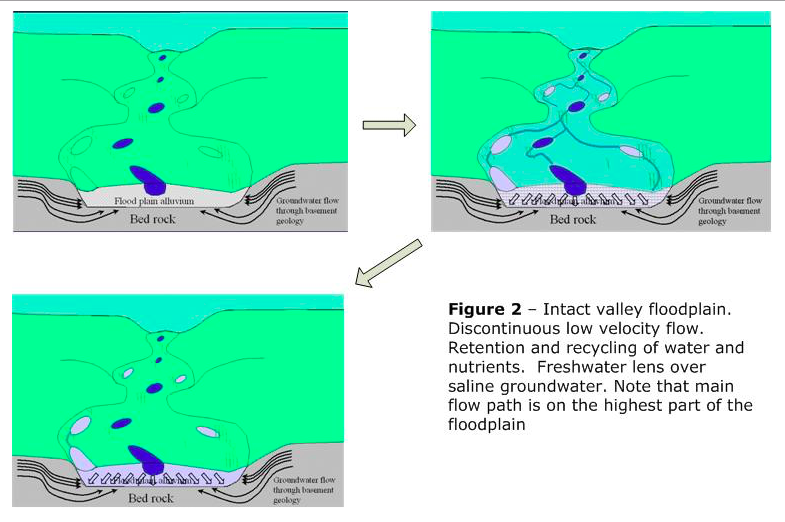 The model that Peter Andrews set up at Tarwyn Park was based on the principle of reintroducing natural landscape patterns and processes as they would have existed in Australia prior to European settlement. This included:​
To test his theories about improved animal health, he measured the growth and performance of thoroughbred race horses.

Peter called his approach the "Natural Farming Sequence". It has later become known as "Natural Sequence Farming" ("NSF"). Since 2016, "NSF" has been a UN recognised model for sustainable agriculture - one of only five in the world. ​​

Find out more about the principles of Natural Sequence Farming here.

Whilst Peter Andrews has been on virtually every Current Affair show over the last few years, none had the impact that his 4 episodes of Australian Story had. It shows the wonderful work he has done for many years on his Tarwyn Park property at Bylong NSW and the more recent transformation he has given Gerry Harvey's stud 'Baramul', in the Widden Valley. To this day, he holds the record for Australia Story apperances.